Do you enjoy the technical aspects of motion picture and video production? Can you pick out subtle differences between multiple shots of the same scene? Do you enjoy working with a variety of software editing packages? Film and video editing may be in your future! 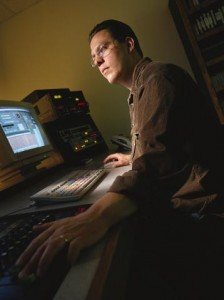 Film editors have crucial artistic roles in the filmmaking process

Film and video editors cut together a number of video pieces into one cohesive production, usually working with directors or producers. Selecting the best and most interesting pieces, they produce a whole that is in line with the director’s artistic vision and the producer’s budgetary and technical means. They usually have a few assistants to help with tracking the different scenes and who may do a portion of the editing as well.

Film and video editors in the motion picture industry often find themselves working for long hours with little time off while a film is under production and post-production and periods of unemployment while they are between jobs. Editors in broadcast fields are usually employed on a full time basis, but may have long hours while under a deadline. Qualities you’ll find important in film and video editing include being creative and detail-oriented as well as having technical, visual and software skills.

For most positions in film and video editing, you will need a minimum of a bachelor’s degree in fields related to broadcasting or film. As most editing work done today is digital, familiarity with a range of editing software will give you an advantage in today’s market, as most editors specialize in a single software package.

Steps to Become a Film and Video Editor

After completing your education, you will find that you will start out as an edit room assistant, after some time you are moved up to assistant editor and typically complete several years of experience before being given an opportunity to prove yourself as an editor. You will also find that you will start on smaller productions and are able to move up to larger productions as you gain experience and expertise. There is a possibility of advancement into a director’s or producer’s role after several years as an editor.

There are a variety of jobs in the same career path if film and video editing isn’t for you. These include:

The average annual pay for film and video editors is $50,930. Though they work full-time on average, the number of hours and times when shooting is done can vary widely, with long hours during film production and periods of unemployment when not in production.

Job openings for film and video editors is expected to grow more slowly than average at 5% between 2010 and 2020. Overall, it’s expected that there will be fewer jobs available in broadcasting, where reporters can edit their own work, while more jobs are available in motion picture editing due to increased use of special effects.