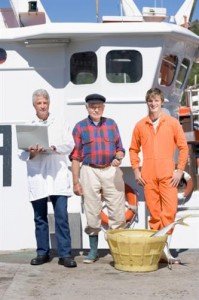 Fish farms have become a common occurrence in the world nowadays and are responsible for the influx of a large quantity of lean, relatively cheap protein into the world’s markets; however, when it comes to both flavor and health, wild trumps farm-raised every day of the week.

Consider, wild fish have a much more varied diet, thus making the fish a source of a wide variety of trace nutrients when eaten. Farm-raised tilapia, for one, is being pushed in the United States as the new cod or whitefish. This is primarily because tilapia is so easy to raise that feeding it primarily corn works just fine. The end result is a fish that is nearly devoid of those wonderful omega-3 fatty acids that are so good for people. In the face of this latest wave of unhealthy seafood offerings via the mass market, it is more important than ever to have a crew of individuals who know the ways of wild fish and can track them in order to provide their healthful meat to the world market.

The fisherman has the highest fatality rate among careers in the United States, about 0.16%. Considering the frequently wet condition of the deck out at sea combined with the heavy machinery used to haul in industrial-sized loads of seafood and the fact that fisherman must follow the fish when they are in season, typically ignoring all but the worst weather in order to do so, it isn’t hard to see how this is the case.

All of these factors are exacerbated by the highly capitalistic nature of the job. Rather than being paid a guaranteed wage, the fisherman is paid per pound collected and the amount paid per pound is totally dependent upon the market value of the fish. When hunting particularly valuable catches, such as Alaskan king crabs, a single trawler can bring in $50,000 to $60,000 per person in a mere three months. These factors come together to take the sort of greedy, risky behavior seen in the movie The Perfect Storm and transplant it into the real world.

In the present market, any individual brave or foolhardy enough with a strong back and the willingness to work hard runs a good shot at finding employment as a deck hand for a fishing trawler. Employment varies from season to season and typically runs for the entire season, thus requiring prospective fishermen to be able to say goodbye to their families and spend time either cooped up or working on a slippery deck for months at a time. Hours are dictated by the captain, resulting in some particularly brutal shifts should the trawler be sitting right on top of a rich deposit of valuable fish.

Given the small space provided and the exhaustive nature of the work, a strong will is required to avoid fraying or cracking, as this will adversely affect both the current haul and the fisherman’s ability to keep moving in this industry. Successful deckhands can eventually become boatswains, then first captains, and then captains of their own independent vessel. Captains and mates of larger vessels must be certified with the U.S. Coast Guard, while those adept in engineering can become licensed chief engineers upon the successful completion of an exam maintained by the Coast Guard.

For those who can properly manage risk and have developed impressive sea legs to boot, being a fisherman can be a very rewarding enterprise. The risks are simply the spice of life for some individuals, and they successfully haul in large quantities of fish for what would be a year’s wage for a highly educated individual in a mere three months. Still, care must be taken to avoid being one of the 0.16%.

View all articles
How to Become a ZookeeperWith a mighty groan, the tree topples to the ground. Axes in hand, the lumberjacks stand there ...
How to Become a BakerThere is something about the position of bread as the staple food of Western society that gets ...
Beginning a Career as an Animal Care & Service WorkerDealing with a variety of animals from very small to very large, animal care and service workers ...
How to Become a Stationary Engineer and Boiler OperatorThe first of many central steam boiler plants that would become the backbone of New York Steam was ...
How to Become a Dental Lab Tech
Becoming a Farmer, Rancher & Agricultural Manager in Today’s World
How to Become a Telecom Equipment Installer and Repairer
How to Become a Semiconductor Processor
How to Become a Quality Control Inspector