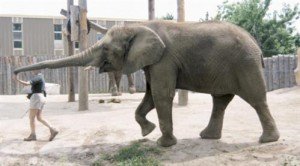 With a mighty groan, the tree topples to the ground. Axes in hand, the lumberjacks stand there silently for a moment, simply looking at that which they have finally felled. It is human nature to take the time to memorialize anything that put up a good fight, whether it be a tree, a student loan, or even an opposing nation. When this impulse is combined with human curiosity and is pointed at the wild aspect of nature that mankind has constantly done war with since our genesis, the zoo is born.

Zookeepers are experts in the proper care and training of animals. Some are experts for a particular sort of animal, such as elephants, while others are more generic in their abilities and are expected to apply themselves wherever needed. In either case, in addition to simply feeding the animals a proper diet and cleaning up after them, zookeepers are also expected to exercise the animals and keep rigorous data regarding the health and well-being of the zoo’s inhabitants. While most animal care and service jobs have some human-facing element, that of the zookeeper is particularly unique in that the zookeeper is expected to be a source of information and instruction, effectively an educator as opposed to a salesperson.

Given the wide variety of exotic and, therefore, expensive animals present in a zoo, zoos expect zookeepers to have a 4-year degree in animal science, biology or some other, similar degree. Further, for the same reasons, zoos prefer that prospective zookeepers have experience with animals in addition to the theoretical knowledge proven by a 4-year degree. As such, in order to become a zookeeper, it is recommended that courses in husbandry, internships taking care of animals, or some other means of getting out there and gaining some real-world experience are pursued aggressively.

Advancement within the zoo is rather constrained. While a zookeeper can move up a ladder of sorts, it is within a singular entity that acts as a service usually maintained in part by government dollars. While there is some shuffling of workers between zoos, the same problem presents itself.

Throughout his or her career, a zookeeper will always be taking care of animals, which, for those who are attracted to this sort of work, is an absolute blessing, but the pay will most definitely look non-profit for the career’s duration. In effect, this causes the work of a zookeeper to be motivated by the nature of the work itself, resulting in workers who feel it is a labor of love and, therefore, put more of themselves into their work on a day-to-day basis.

Interestingly, the animal care and services sector as a whole is expected to make tremendous gains from 2010 to 2020, clocking in at a staggering 23 to 28% growth as opposed to the expected average across industries of 14%. Though the need for zookeepers themselves should not be expected to grow at this rate, mainly because few new zoos are actually being constructed and many of those zoos that are in existence tend not to expand particularly aggressively, a healthy industry makes it possible for the vast majority of those who call themselves, or wish to call themselves, zookeepers to have a solid industry to fall back upon should funding problems cause one to become unemployed.

Those expecting to use the general animal care and services job pool as a backup plan should be cognizant of the various certifications that dot the landscape. The industry as a whole is a highly complex beast that ranges from dog walkers and pet groomers to horse trainers and cattle breeders. A zookeeper’s skillset will work when translating to some of these, but not all of these.