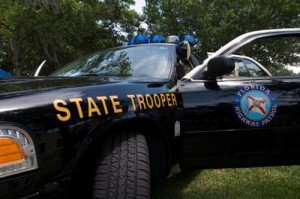 Becoming a state police trooper can be a very worthwhile career, for those who meet the strict qualifications. Law enforcement in general is very demanding and, in some instances, dangerous. State troopers, however, not only oversee local police officers (sometimes investigating them in cases of malfeasance or failure to perform their jobs correctly), but also take on far-reaching, complicated responsibilities.

Simply put, they have to know more and be ready for bigger challenges than common law enforcement officers. The hours may be long, the job can be very stressful and physically/mentally demanding, but, fortunately, what is required to become a state trooper is clearly spelled out by each state.

Characteristics That Can Help One Become a State Trooper
$55,010
High School or GED

Just as having a criminal record will disqualify candidates (in most states) from becoming a trooper, things that can help one qualify include:

Steps to Take in Becoming a Trooper

The first step, of course, is to apply to, be accepted by and do well in the state-run police academy. The better one does at the academy, the bigger one’s chances of being offered a job after graduating. The criteria one generally must meet include:

Secondly, one should complete as much formal education as possible. While a high school diploma is generally the minimum requirement, most states now require at least some college credit. Having an associate’s, a bachelor’s, what’s even better, a graduate degree (preferably in a legal/law enforcement field), can give applicants a significant “edge.”

In looking around at potential programs (criminalistics, forensic science, pre-law, etc.), online colleges/universities should be seriously considered. These programs can save money, time, and can also be super-convenient, compared to on-campus programs.

Things That May Disqualify Applicants

Characteristics/traits that can hamper/destroy one’s chances of becoming a trooper include:

Normal Duties of a Trooper

State troopers may be required to:

With a median salary of about $55,010/annually, state troopers appear to have a bright future ahead. Between the years of 2010 through 2020, for example, a 7% job growth rate (or 58,700 new jobs) is expected, according to the US Bureau of Labor Statistics.

Becoming a state trooper requires, above all, that potential applicants run their lives impeccably at all times. That includes never using drugs, gambling, or engaging in any kind of illegal activity; it also entails not associating with lawbreakers and troublemakers.

In other words, state troopers must be life-long role models—the kinds of people everyone can look up to, respect and depend upon, especially when sirens are going off!