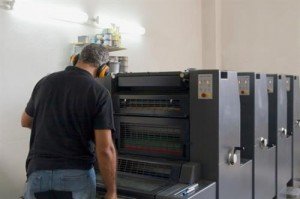 From Gutenberg to Benjamin Franklin, printing has a number of big names attached to the profession. The advent of cheap press vastly improved literacy rates throughout the world and promoted a boom in information that is still being felt throughout the world today. Plentiful books caused education to become a mainstay for all peoples, thus giving science and technical industry the ranks upon ranks of educated workers necessary to sustain themselves in their current incarnation. Whatever the application, if esoteric knowledge or abstract skill is involved, the press has a hand in it.

Responsible for the creation and setup of printing plates, the organization of the output into the desired form, and the operation of all equipment necessary to get to the endpoint of finished product, the printing worker can be a generalist or specialize in one of the three phases of the printing process: prepress, press, and finishing.

304,600
-4%
(12,600)
Find Related CareersSOURCE: US Bureau of Labor Statistics
Specialization is much more commonly used in big press shops where specialization can be useful, while those who are part of smaller print shops usually take a jack-of-all-trades approach. Additionally, those who operate their own print shop have all of the standard obligations of the entrepreneur, including the need to hunt up clients.

To become a Printing Worker, only a high school diploma or GEDis required in order to qualify to do the job. However, Prepress, given its modern incarnation, involves taking electronic data, such as a PDF file, and converting it into a number of plates for the production of physical paper goods. As such, a 2-year degree or vocational training program is required to get a foot in the door when prepress is part of the job.

Big printing is an industry under siege. The Bureau of Labor Statistics expects there to be a 4% reduction in the number of printing workers from 2010 to 2020. To put this in perspective, the average rate of change among industries is expected to be a 14% growth in the number of jobs over that same period. The reason for this is simple: electronics.

Because of polarity shifts in the market, such as e-mail taking the place of junk mail, e-books taking the place of the softbound and hardbound works of print, and scientists being wrong when they almost childishly assumed that the Internet was to be a fad, the absolute amount of printed material is on the decline. That, of course, means that there is less need for printing workers.

Not all is gloom and doom, however! The information superhighway that makes mass printing obsolete makes a wonderful world of small printing possible. These small printers, typically specializing in things that are not simply meant to be read, but used, such as board and card games, use the Internet as a means of distribution and advertisement, sometimes even offering an online storefront as their only storefront.

This effectively removes the chokehold of big printing and leaves it open once more to mercurial creative geniuses. It’s always possible that a blooming printer of this generation can use this somewhat uncertain, but exciting market to become the next individual who joins Gutenberg and Benjamin Franklin in the ranks of the household names of printers.